It is highly relevant which genotype the farmer chooses for his egg production; a study carried out at the Department of Animal Science, Aarhus University, found a big variation in the hens’ growth and parameters important to the immune defense.

When comparing growth and various immune parameters in three popular genotypes used in organic egg production in Europe, a great variation between the genotypes was found in the various parameters studied. Provided that the relevant genotypes can be connected to genetic markers, this may lead the way for selective breeding based on immune competence.

Hens with high immune competence are preferred in the organic production
In the recent years, the demand for organic products, including eggs, has increased. Other claims for the hens have been raised in the organic egg production compared to the conventional egg production, among others due to a more strict regulation regarding the use of medication. The lower use of antibiotics also results in it being of advantage if the hens have a high immune competence.

The hens’ genetic background influences both the innate and acquired immune defense. The Hellevad genotype, which originates from northern Jutland, has been bred for several generations without using medication or vaccinations and is considered a robust hen. Today, however, Hellevad hens are vaccinated against the Newcastle disease virus due to Danish legislation.

Growth and immune parameters studied in three genotypes
The purpose of the present study was to compare growth and immune parameters between the Hellevad genotype and the other two genotypes, Bovans Brown (Bovans) and Hisex White (Hisex), used in organic egg production. The study was carried out in hens exposed to a Danish routine vaccination schedule in the period between 1 and 16 weeks old.

Innate immune components measured
Innate immune components, which may express robustness, are the so-called natural antibodies (NaB) and mannose-binding lectin (MBL) which were measured during the entire study. Other studies indicate that a low level of MBL and NaB increases the susceptibility to several diseases.

In the present study, it turned out that the genotypes Hellevad and Hisex had higher concentrations of MBL in serum from 7 weeks of age than Bovans (Fig. 1). Variation in the NaB level was observed between the lines, and Hellevad had a higher level of NaB in week 1 than the other two lines (Fig. 2). From week 11, Hellevad and Hisex had higher levels of NaB than Bovans. At week 5, a higher immunological reaction was observed in Bovans in several of the parameters measured, which, presumably, is due to a reaction to the GUMBORO vaccine injected in weeks 3 and 4. 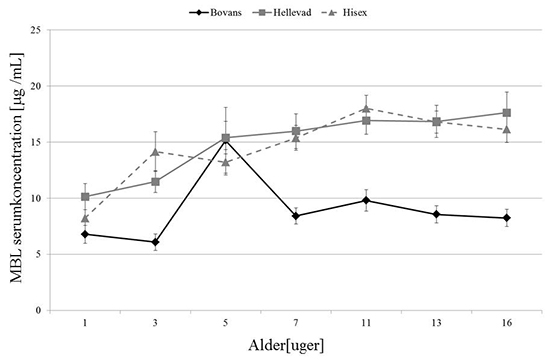 Fig. 1: Concentration of MBL measured in serum in Bovans, Hisex and Hellevad. The vertical lines at each dot show the variance. 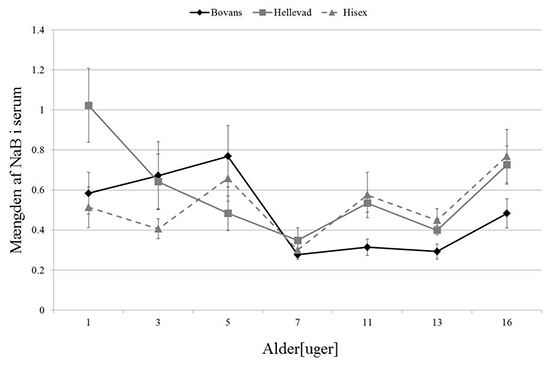 Fig. 2: The level of NaB in serum shown as a relation between sample and the positive standard control. The vertical lines at each dot show the variance.

Important differences in growth and immune parameters
The antibody response to the various vaccines varied highly between the lines. Bovans reacted more to the Gumboro disease vaccine than the others did, but these hens were also observed having a response to other immune factors immediately after injection of this vaccine. This response resembles an infection-like condition, which is unwanted. Furthermore, the level of circulating white blood cells was measured, which also showed a large variation – not only between the three genotypes, but also individually. As regards growth, Hellevad had the highest body weight from 5 weeks of age and onwards.

Overall, important differences in growth and immune parameters were observed between genotypes. Therefore, we conclude that it is highly relevant which genotype the farmer chooses for his production. However, further studies are required to see how these differences influence the hens’ general health and protection from diseases. Based on the present study, though, we recommend choosing Hellevad or Hisex, but one should also consider other breeding parameters.

This study was part of a bigger project “Development of genetic selection technology for polyvalent resistance to infectioous diseases” (POLY-REID) which was supported by The Danish Council for Strategic Research, the Poultry Production Levy Fund, Hellevad hatchery and Cobb-Vantress.