If sows are fed at least three times daily, they will repay with shorter farrowings and considerably fewer stillborn piglets. This is the clear result of a new study carried out by scientists at the Department of Animal Science, Aarhus University.

New research at the Department of Animal Science, Aarhus University, shows that the duration of farrowing increased with increasing time from the sow’s last meal until farrowing began. The results are based on a study at AU Foulum, where scientists have managed to get quicker farrowings (3.3 hours) and fewer stillborn piglets (3.7%) when the sows were fed no later than three hours before the farrowing started. The total study included 166 farrowings, with the sows giving birth to a total of 2,889 piglets.

”Energy depletion prior to and during farrowing is the reason why some sows have prolonged farrowings –and fatigue is the underlying reason why many piglets are born dead in modern high prolific sows”, says senior scientist Peter K. Theil who is leading the study. 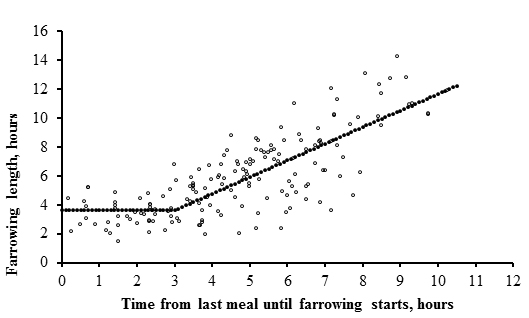 Sows in late gestation are typically fed twice a day prior to farrowing and often within normal working hours – for instance at 0700 and 1500 hours. This means that when a sow starts farrowing in the morning at 0600 hours, she has not had any feed for the last 15 hours before farrowing. According to Peter K. Theil, it is extremely important to reduce the length of the farrowing process because the number of stillborn piglets increases at the same rate as the blood sugar decreases, and the increase in the length of the farrowing process costs in terms of more stillborn piglets (Figure 2). 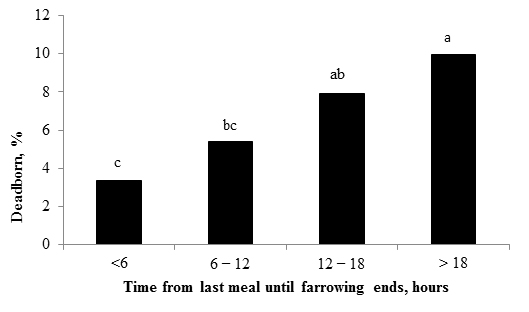 Figure 2. The number of stillborn piglets increases when the time from the latest feeding to the end of farrowing increases.

At least three feedings a day before farrowing

”Thus, the message is clear: High prolific sows that give birth to large litters should be fed at least three times a day before farrowing, and highly likely four times  would be even better if you have an automatic feeding system. It would be wise to allocate 3.0 feed units per sow per day until farrowing and not reduce to 2.5 feed units per sow as has been the recommendation so far”, says Peter K. Theil. He emphasize that it is NOT a wise solution to increase the daily feed supply greatly, because that will not be of any help. The real problem is that the starch is absorbed from the intestines in the form of glucose, and this happens in the first four to six hours after feeding.

”Overall, it looks as if there is great potential for reducing the number of stillborn piglets and thus increase piglet survival markedly, and by securing a more constant energy supply across the day for the sows before farrowing, it will not be unrealistic to believe that also the vitality of the liveborn piglets will be improved, which also will contribute to a higher piglet survival. This study provides both better animal welfare for sows and piglets and looks like a great breakthrough to reduce piglet mortality. For Danish pig producers, this could potentially mean a large financial gain for them,” concludes Peter K. Theil.