When it comes to the type of damages pigs risk to incur during growth, it is relevant in which production system they grow up. We see great differences between herds within conventional indoor, conventional free-range and organic finisher pig production. Thus, according to a study from Aarhus University there seems to be possibilities for improving all three forms of production regarding health.

Organic and conventional free-range finishers, compared to indoor finishers, have more space, undocked tails and access to roughage and open space. Thus, free-range and organic pig production offer the pigs good opportunities to perform species-specific behaviour. These conditions aim to increase animal welfare and approach a more natural way of keeping animals. The occurrence of illness and damages is also an important parameter to animal welfare. To get a total estimation of the pigs’ welfare there is a need for assessing the pigs’ level of illness and risk of damages in these systems. One way of assessing these conditions is by looking at meat control data from the slaughterhouses. Here, signs of illness and damages on the slaughtered pigs are assessed.

A study at Aarhus University has taken a closer look at the lesions in finishers from three different types of production systems: conventional indoor, conventional free-range and organic free-range. The study included slaughter data from nearly 1.1m finishers registered at routinely meat inspection during a period of three years (2013-2015). The aim was to compare the occurrence of lesions in finishers across the three production systems.

Different production systems are associated with different challenges
The study from Aarhus University shows that respiratory infections for all three production systems were by far the most common lesion accounting for an average of approximately 20% of pigs within herds in all three systems. On the other hand, many other problems were clearly associated with the kind of raising system. For instance, the results showed that the risk of parasitic liver spots, tail damages, arthritis, skin wounds and fractures was highest in the two free-range production systems, while pressure bruises on legs, umbilical hernia and hoof abscesses more often seen in conventionally housed pigs. 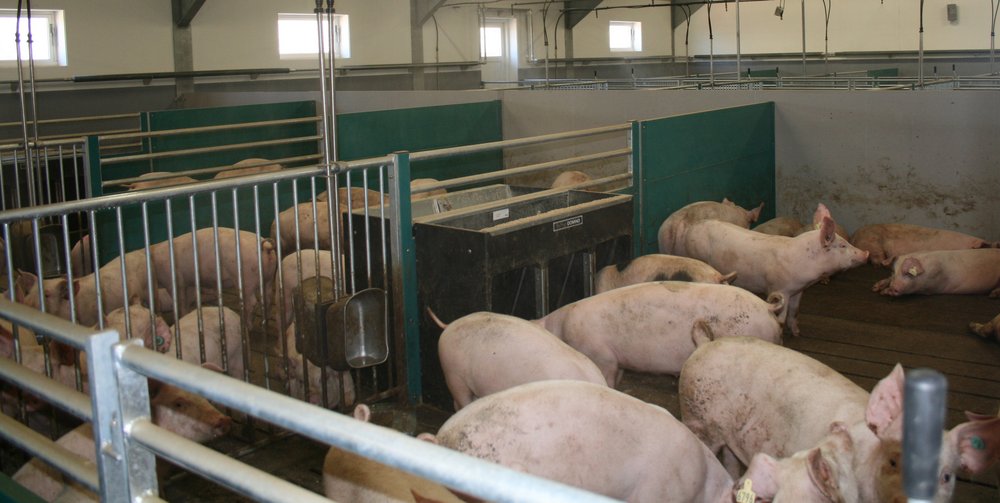 “The fact that pigs from extensive systems are at higher risk of getting liver spots is not surprising, as open spaces with soil and straw-bedded pens increase the risk of infections with roundworm causing the spots”, says postdoc Hanne Kongsted from the Department of Animal Science, Aarhus University. She continues: “But when looking at tail biting, one could have expected – or definitely hoped – that the extra space and access to open spaces, roughage and straw would have minimized the occurrence. Our study shows a three time higher likelihood of tail damages in pigs in free-range systems (with 2-3% of the pigs having damages) compared to the pigs in conventional systems (with approximately 1% of the pigs having damages). One must remember that the pigs in the free-range systems, unlike the indoor-housed pigs, are not tail docked and that the two types of pigs are therefore not directly comparable. Tail biting is a serious problem in many free-range and organic herds, but variation among herds shows that it is possible to decrease the level. At present, we are working to point out which herd-factors are most important in order to prevent tail-biting in free-range systems. Our results from abattoir data indicate that climatic conditions are a fact, as there is a higher occurrence of tail bites during winter.”

The study showed that bone fractures were twice as likely in free-range and organic pigs (approximately 1% had fractures) compared to indoor-raised pigs (approximately 0.5% had fractures). More than half of these damages were healed fractured ribs. “This type of damage is most likely to happen when the pigs nurse. The piglets in the outdoor farrowing huts are not as well protected from being crushed by the sow as they are in the indoor farrowing pens where the sow is restricted by bars. Thus, this may be perceived as a consequence of more natural conditions for the sow. It will probably not be realistic to avoid squeezed pigs under free-range conditions, but it can definitely be done better. Presently, we are working on improving outdoor farrowing huts protecting the piglets significantly better than the existing ones”, says Professor Jan Tind Sørensen from the Department of Animal Science, Aarhus University.

“The significantly higher occurrence of pressure bruises on the legs and a slightly higher occurrence of hoof abscesses in conventional finishers – compared to free-range pigs – are probably due to a non-bedded flooring  and the fact that the hoofs can be trapped in the slots in the drained floor”, says Hanne Kongsted. And she continues: “We also saw that indoor finishers had a higher prevalende of umbilical hernia than outdoor raised pigs. Other studies have found the same results without being able to indicate a direct causal relation. However, one suggestion could be that daily supply of roughage in free-range systems results in a better intestinal motility and thus better opportunities for the intestines in the hernias to contract themselves.”

The study did not find any significant differences between the two free-range systems (conventional and organic) as to the level and type of damages. This was surprising to the researchers, as the use of antibiotics is markedly lower in the organic production than in the conventional free-range system. Thus, one could have expected a higher occurrence of chronic inflammation in the organic pigs at the time of slaughter. “As this was not the case, the explanation may be that the higher weaning age in organic pig production affects the animals’ health and immune response positively and that the increased space requirement results in a lower infection pressure among the animals”, says Hanne Kongsted. “In any case, it is an interesting result, and from a broader perspective it encourages us to look deeper into the opportunities for reducing the use of antibiotics without compromising animal welfare. Our results indicate that organic finishers do not suffer from lack of antibiotics. Rather, as both organic and free-range finishers both had a higher level of lesions than conventionally raised pigs, it probably shows that outdoor based systems are more challenging to manage due to the less restricted conditions.

Read the full scientific article in The Veterinary Journal here