It seems like the rider’s weight does not affect the horse’s welfare as much previously expected. Neither the horse’s stress hormone level, heart rate nor behaviour was affected during moderate work when the rider gained 25% weight in a project conducted by Aarhus University. However, the horses showed signs of discomfort and stress if the rider’s balance was poor.

The topic about how the rider’s weight affect horse welfare has often been up for discussion. The topic is complicated as many factors come into play, for example the horse’s training level, the rider’s skills and adjustment of the equipment. According to former guidelines, the rider:horse bodyweight ratio should not exceed 20%. Since then, some studies have suggested that increased rider weight caused an inappropriate load to the horse. However, none of the studies were designed for excluding other factors than weight (for example increased fatigue or the rider’s skills) as the cause of the horses being affected by the increased rider’s weight.

The largest study of rider weight so far

According to associate professor Janne W. Christensen, Department of Animal Science, Aarhus University, knowledge about how the rider’s weight affects the horse at a typical workload, which many horses work under, is missing. Therefore, she conducted a study in cooperation with veterinarian Mette Uldahl aiming to gain more knowledge about how ordinary riding horses in Denmark are affected by an acute increase of the rider’s weight. The experiment is the largest of its kind to date.

“To ensure that we could study the effect of an increase in weight in isolation (i.e. keeping all other parameters alike) we added extra weight to the upper body of riders riding their own horses”, says Janne W. Christensen. Besides the increased rider’s weight, the experiment also included measures of the saddle pressure, a number of tests assessing the rider’s balance, video recordings of the horses’ reactions, and gait symmetry.

In total, 20 female dressage riders with their own horses were included in the study, which stretched across four test days per equipage. All horses were active dressage competition horses. On the first test day, the riders’ body mobility and balance were tested without the horse, horse and rider were measured and weighed, and the horses were tested in a lunge test without weight. The following three days, the horses were ridden in a controlled warm-up programme (10 min) followed by a dressage programme (5:20 min of walking, trotting, galloping) and ended with measuring of saddle pressure and gait symmetry (10 min of trotting for lameness assessment). 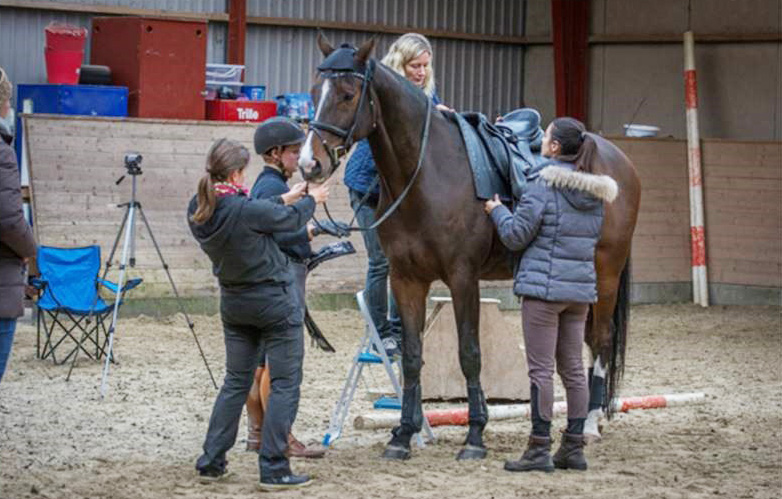 During the last three test days, three different categories of weight were put on the rider in a balanced order (0%, 15% and 25% extra weight) in the form of lead blocks mounted on the rider’s vest. When the rider wore 25% extra weight, the rider:horse weight ratio was 15–23% for the 20 equipages. The riders were instructed to ride their horse with the same equipment in the same way all three days. Correct adjustment of the horses’ equipment was controlled.

Every test day, the following was measured on the horses:

No effect of increasing the rider’s weight by 25%

The results from the experiment show that an increase in the rider’s weight of up to 25% of the normal weight does not affect the horse’s stress level (stress hormones and heart rate). Neither did they find any effect of the rider’s weight on the horse’s behavioural reactions. “The horses’ behavioural reactions were individually different. The types of behaviour we saw the most during test riding were tail swishing and open mouth. However, the horses did increase their performance of these kinds of behaviour when the rider became heavier. Individual differences in riding technique, equipment or the horse’s level of training may play a role in this result”, explains Janne W. Christensen.

No effect of gait symmetry and lameness

Nothing in this study indicates that a heavier rider results in lameness in the horse, which previous English studies have suggested. “Contrary to the English study, which used a subjective lameness assessment and different riders, we have used objective measures for lameness assessments and the same riders during test riding”, explains Janne W. Christensen.

“We cannot preclude whether we would have seen an effect of the increase in weight had the intensity of the test riding been higher, or had we tested for a longer period. But we can conclude that the rider’s weight - within a rider:horse weight ratio of 15-23% - in the short term does not play as big a role as long as the horse works at a light to moderate level, equivalent to the way many leisure horses are ridden”, says Janne W. Christensen.

Another aspect of the study was to test the rider’s on-ground balance, symmetry and ability to move the pelvis and compare this to crookedness in the saddle, as measured via the saddle pressure mat. The aim was to make a separate analysis of how these factors affected the horse’s welfare. The preliminary results from this part of the experiment have shown that by means of very simple on-ground tests it is possible to identify the rider’s balance and movement patterns, which may cause problems during riding.

“The results show that we need to focus on the rider’s training and fitness, not only when speaking of ‘weight in kilos’ but very much also regarding awareness of the rider’s own body strength, balance, symmetry and muscular activity. If you want a sustainable riding horse, it is important to pay as much attention to your own strength and body function as to your horse’s”, concludes Mette Uldahl and Janne W. Christensen.

This part of the study is not scientifically published yet.

Facts about the project